Clark County needs volunteers to pick up roadside litter as a way to beautify the county.

To adopt a road, volunteers make a two-year commitment to pick up litter at least three times a year. The length of the adopted roadway may vary, but typically most sections are about two miles.

In addition to litter pickup, Clark County may approve weed control and other roadside work.

The county will provide all supplies and equipment for cleanup events, as well as post signs recognizing volunteer groups along adopted roadway sections. 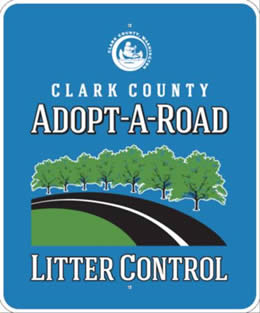 Most individuals or groups are eligible to participate in the program, as long as their name does not endorse or oppose a candidate or advocate a position on a specific legal issue, initiative, referendum or legislative proposal.

Each set of volunteers must designate a group leader who will reserve cleanup kits, ensure all necessary forms have been submitted and complete other responsibilities.

Safety rules are important to protect participants during cleanup events. Rules that volunteers must follow include:

More information on the Adopt-A-Road program is available by watching this CVTV video from December 2012.
[video: https://www.youtube.com/watch?v=G4eK9kMdOr4]

Adopted roadways are county roads in unincorporated Clark County. The program does not apply to federal and state highways, city streets or private roads.

Clark County already has identified about a dozen road sections suitable for adoption.

Volunteers also can request to adopt other road sections. Public Works will assess the proposed section for road shoulders, sight distances and other safety considerations before deciding whether to approve the request.