Reduce the spread of COVID-19: Get the vaccine. Wear a mask. Wash your hands. Stay home when feeling ill. Learn More > 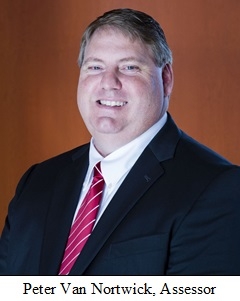 Peter is a fourth generation Washingtonian, growing up in the City of New Castle area where he attended Hazen High School and the University of Washington. Upon graduating from the University of Washington, Peter started working at US West New Vector Group. Peter’s work at US West introduced him to the telecommunications industry where he worked for the next 10 years in multiple startup companies both international and domestic.

Peter first moved to Clark County in 1996 to work at Electric Lightwave. After the collapse of the telecommunications industry, Peter began to work as an appraiser eventually becoming a Certified General Appraiser. Peter was the Managing Partner of American Commercial & Residential Appraisal prior to being elected Assessor. Peter is a graduate of Leadership Clark County and in his free time is dedicated to supporting high school sports in Clark County.

He is married to Kate and has 3 grown children, Brian, Haley and Hanna.