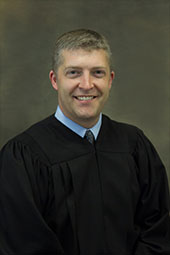 While on active duty with the U.S. Army, Commissioner George served as a military prosecutor, defense attorney, and criminal appeals attorney.  After leaving active duty, he served as a prosecutor with the City of Vancouver, then as an Assistant Attorney General for the State of Washington.  Later, he was in private practice, where he represented clients in criminal matters and appeals before state agencies, and children in the juvenile dependency system.

Commissioner George was awarded a Bronze Star Medal for his service in Iraq, and currently serves as a Judge Advocate in the Washington Army National Guard, holding the rank of Lieutenant Colonel.  He is admitted to practice in Washington and Oregon, the United States Court of Appeals for the Armed Forces, and the Supreme Court of the United States.