The Greely Building is significant for its association with the history of automotive businesses in Clark County. In 1920, Charles Henry Greely, a resident of Ridgefield, had the Greely Building constructed at the southwest corner of the intersection of Washington and 11th Street, Vancouver. Upon the completion of the building, Greely sold automobiles under the business name of the Clarke County Auto Company.

Automobile industry
With the opening of the Interstate Bridge and the establishment of the automobile as a means of transportation, automobile businesses were opening rapidly in Vancouver. The eastern portion of the block totaling 200 feet by 100 feet was devoted to the Greely auto business while the western portion of the site consisted of an accessory building that was used by the Universal Auto Company, another automobile venture.

By 1931, the Clarke County Auto Company was no longer in operation. Wilcox Motors, Inc. occupied the Greely Building from 1931 to 1938. The Farm Tractor and Equipment Company replaced the building’s auto businesses in 1938.  Due to the open interior spaces of the building and floors that were built strong enough to support cars, furniture sales became the next businesses to occupy the building.

Furniture stores
In 1948, the Vancouver Furniture Company was operating in the building and in 1955, Flynn Furniture was there. In about 1965, the Koplans bought and renovated the building, later expanding their floor-covering business into a full-fledged home furnishing business.

In 2004-2005, the building was renovated, resulting in vinyl-clad replacement windows on the second floor which are the same size and number of lights as the original deteriorating windows. The exterior bricks were repainted a uniform cream color with rust accents. The western addition was altered to have a more contemporary appearance. The interior second floor was upgraded to serve a more formal sales setting but the original features including the exposed brick, exposed wooden beams, an automobile engine hoist and the concrete ramp were retained. 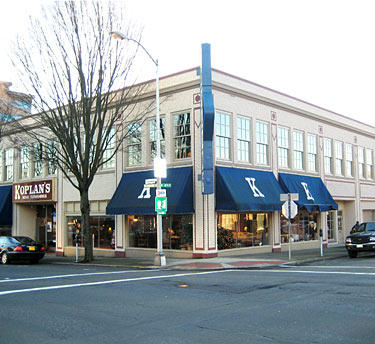 Did you know?
This is an early and rare example of a building used for an automotive business.
Built
Circa ~ 1920
Open to the public
No
Location