The Sunnyside Cemetery is a one acre site located at the crest of the hill overlooking the Washougal River Valley. This beautifully maintained park like landscape has 194 grave sites, many from early pioneer families dating back to 1881.  High on a rolling hilltop, the cemetery overlooks the past or present dairy farms of the Krohns, Kloningers. Saderwassers and Stauffers.

Many Swiss and German immigrants arrived in Washington, and specifically in Washougal in the 1870s and 1880s.  Many of those that arrived found that most of the land had already been claimed, therefore they moved north to an area called Sunnyside that was open to homesteading and settlement.  As with many immigrants moving to America they found comfort living near and among those that shared their same language, values and culture.  These Swiss and German pioneers built a local dairy industry drawing on their agricultural heritage that supplied the insatiable demand for dairy products in the area.

The land for the cemetery was donated by one of the area’s first settlers, Frederick “Fritz” Krohn.  “Fritz” emigrated from Germany and came to the area in the 1870s and quickly started a family.  His children were the first burials at the cemetery.  Over time, other Swiss and German Sunnyside families asked permission to bury loved ones at this picturesque cemetery.

The Sunnyside Cemetery is significant for it is one of the last reminders of this Swiss/German cultural enclave in Clark County.

This is a private cemetery. 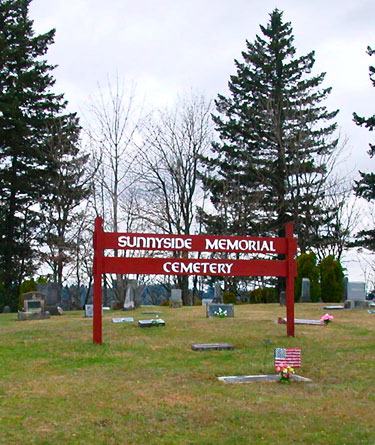 Did you know?
The responsibility for administrating the Sunnyside Cemetery Association has passed down from pioneer family to pioneer family.
Built
First burial circa 1881
Open to the public
No
Location