The EPA has created an informative infographic outlining important information about Harmful Algal Blooms, or HABs, which Clark County has adapted below to provide information on: 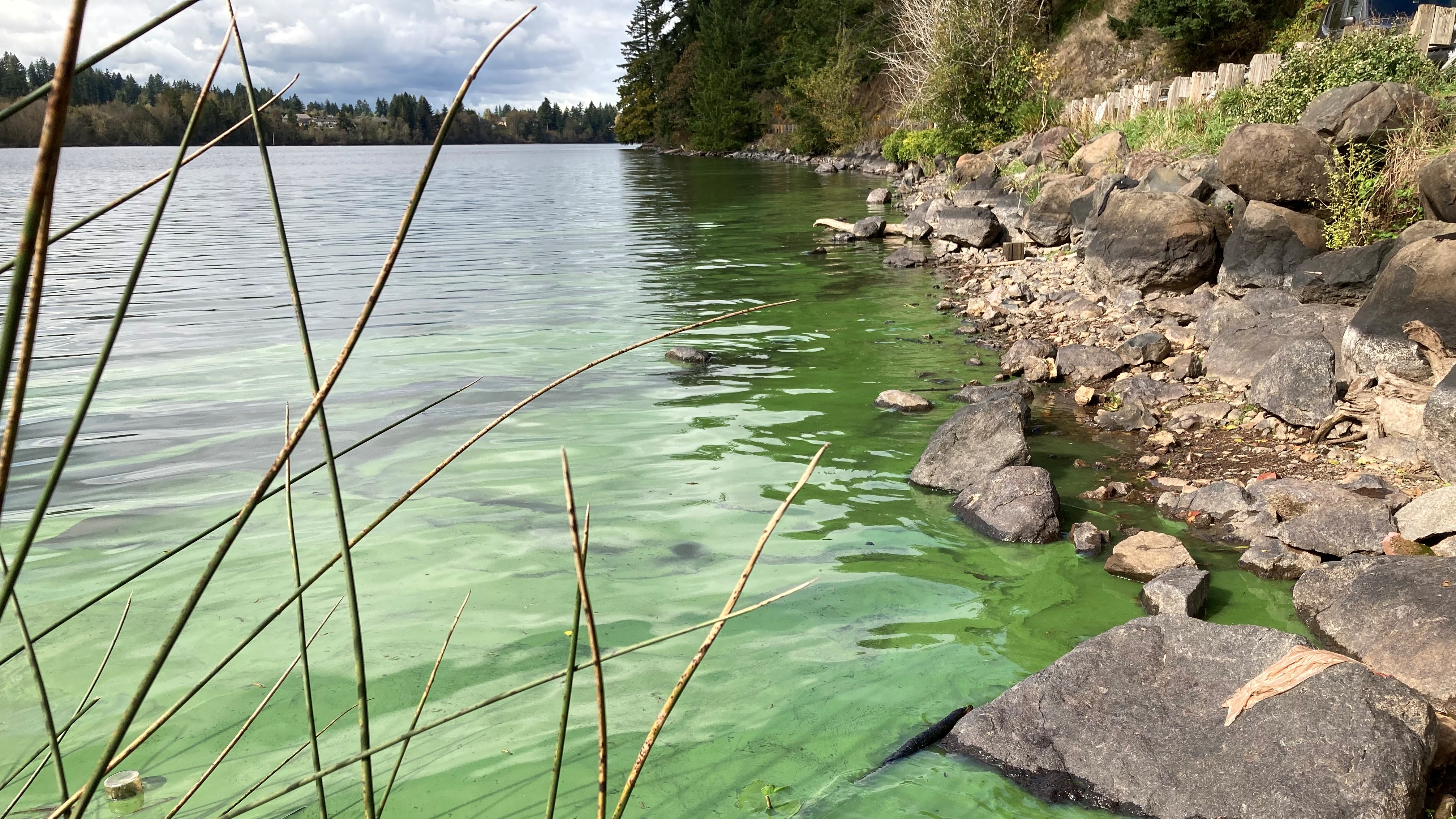 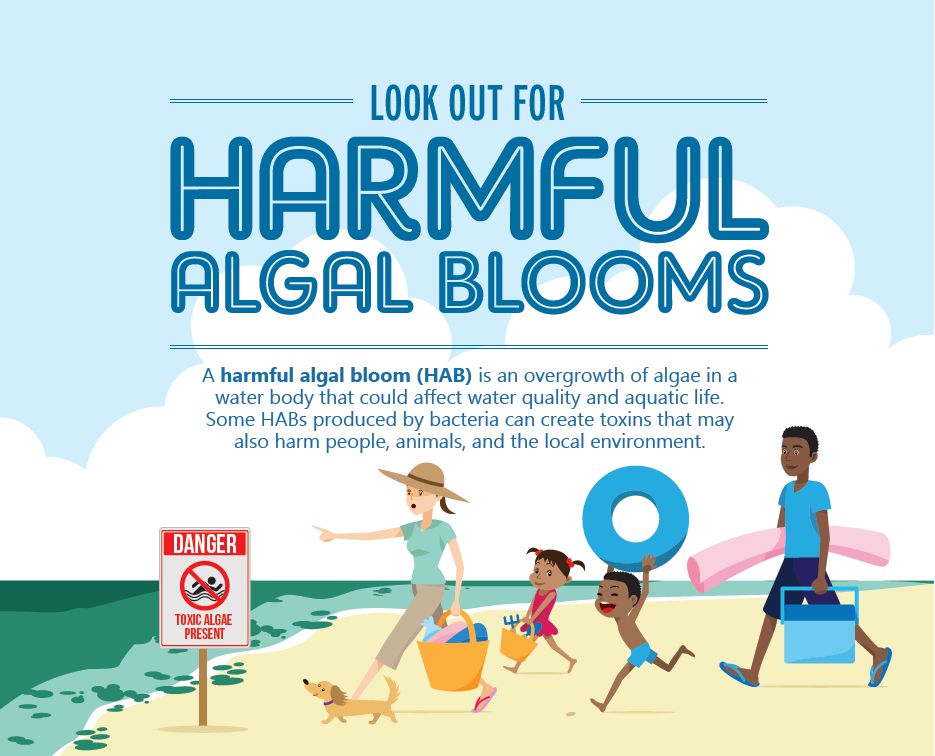 Harmful algal blooms (or HABs) are overgrowths of bacteria that can photosynthesize like algae or plants by turning sunlight into energy.

DID YOU KNOW that cyanobacteria (formerly blue-green algae) are:

Many mistake plant algae or other aquatic plants as a harmful algal bloom. An algal bloom is comprised of microscopic bacteria that form a scum on the surface or are distributed throughout the water column.

We have year-round educational signs posted at several waterbodies prone to harmful algal blooms in Clark County, you can find more information here on our current advisories page. When recreating in an area prone to harmful algal blooms, its important to be aware of current conditions and be aware of surroundings before allowing children and small pets to enter the water. It is important to remember, when in doubt, stay out!

It is important to avoid contact with areas of scum and activities that provide a higher risk of exposure during a harmful algal bloom event.  We issue advisories to limit recreation when conditions are hazardous and can cause acute illness. When a harmful algal bloom is reported, we sample the waterbody once every Monday or Tuesday testing for microcystin (liver toxin) and anatoxin-a (neurotoxin).

Algal blooms can produce potent toxins known as cyanotoxins that can cause serious illness and even death in animals and people.

How are people and animals getting sick from harmful algal blooms:

Children and household pets are most likely to experience more serious health effects due to smaller body mass and higher likelihood of ingesting water due to their behaviors. 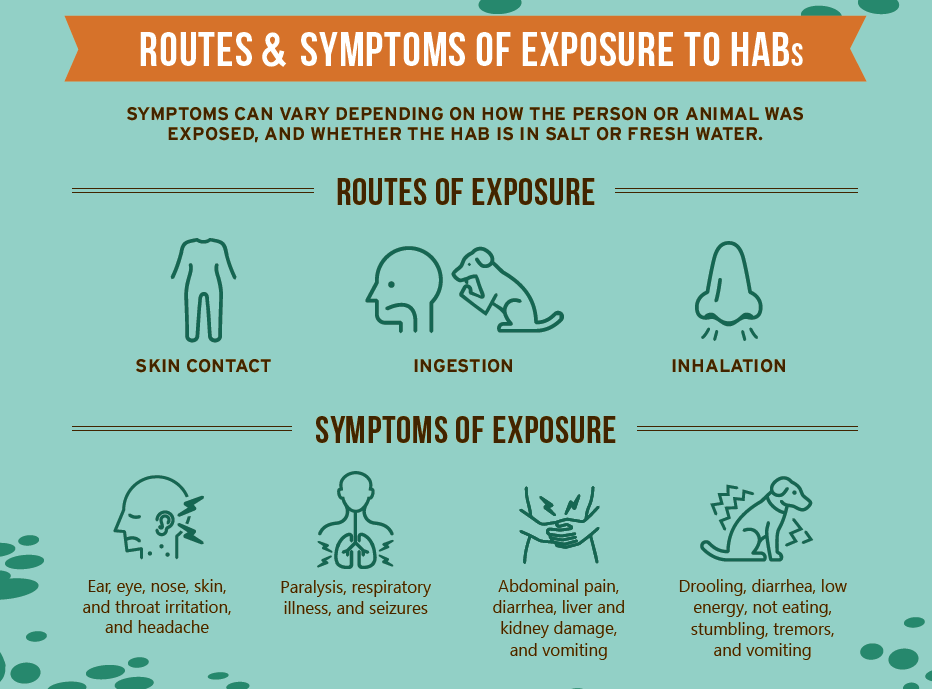 When people or animals are exposed to cyanotoxins, adverse health effects may range from a mild skin rash to serious illness or death for animal exposures. Acute illnesses caused by short-term exposure to cyanobacteria and cyanotoxins during recreational activities include hay fever-like symptoms, skin rashes, respiratory and gastrointestinal distress. Exposure to drinking water contaminated with elevated concentrations of microcystin could cause liver and kidney damage while exposure to anatoxin-a will result in neurological symptoms ranging from paralysis, seizures, and tingling sensation.

If you do come into contact with water that is known to be contaminated with cyanobacteria and/or cyanotoxins, the Centers for Disease Control (CDC) recommends that you rinse off with clean, fresh water as soon as possible. Seek medical treatment right away if you think you or someone you know might have been poisoned by cyanobacterial toxins, especially when any of the symptoms mentioned above are recognized.