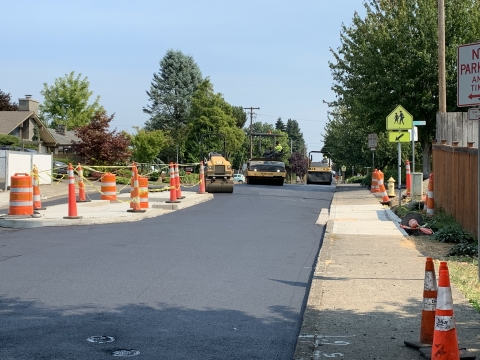 This surface treatment is for structural reinforcement on arterial and collector roads in both urban and rural areas. The depth of an overlay is between 1 and 4  inches.

Surface defects and irregularities are repaired prior to adding a new layer of hot mix asphalt.

In some instances, a thin layer of asphalt is applied to subdivision or access roads that have surface irregularities but remain structurally sound.

This paving, known as a thin lift, evens the road surface and corrects some drainage issues. It provides a more modest treatment on less heavily used roads than a standard overlay.

There are some driver delays with asphalt overlays. Flaggers typically can guide vehicles through the construction zone without fully closing the road.

Paving is completed. Crews will be completing miscellaneous work such as manhole adjustments at the following locations:

There may be some traffic delays, as travel lanes may be reduced or shifted at times. Flaggers will help guide drivers around the work areas.

Work will be performed at these various roadways locations between the hours of 7 am and 7 pm, Monday through Friday. Work is anticipated to be completed by the middle of October 2022. The completion of this work is weather dependent.

Micro seal is similar to a slurry seal, only that it uses larger pieces of rock. Cement also can be added to the mixture. A micro seal dries faster than a slurry seal and is used on multilane roads, which allows traffic to pass on one lane while the other is being treated.

To further ease traffic disruptions, sand can be shoveled onto intersections so vehicles can drive over the treated surface only minutes after it has been applied. 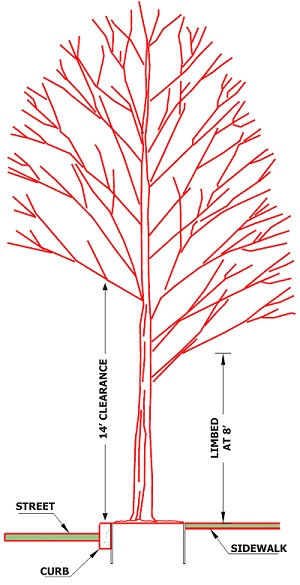 In preparation for summer road work, residents sometimes need to prune their vegetation so construction vehicles can get close to the curb.

In addition, vegetation needs to be trimmed to improve traffic visibility and remove sidewalk or pedestrian obstructions.

Homeowners are responsible for pruning and maintaining their vegetation, including debris disposal.

Bushes, shrubs and other low vegetation also need to be trimmed so they don’t hang into the street.

If residents do not trim their vegetation, county road crews will cut it. This work will be done for free, but it will not be done to a landscape quality desired by many residents.

For this reason, residents are encouraged to trim their vegetation.