Thank you to everyone who joined us at our public meeting! The open house was held virtually on Tuesday, September 20, 2022.

To watch a recording of the virtual open house, click on the link below.
[video: https://youtu.be/7YRavo4l_OE]

Neighbors and community members were invited to learn about the budget and plans for parks projects for the 2023 fiscal year (PDF). The projects being reviewed are part of the Capital Improvement Plan, which consists of plans for major maintenance projects, preventative maintenance and the creation of new facilities and amenities at county parks, including:

Revisions to the 2024-2028 projected budget will also be reviewed at the meeting.

Parks and Lands will seek approval from the Clark County Council to utilize available parks impact fee funds, real estate excise tax funds and general funds for projects in the capital improvement plan. Projects included in the plan address park system needs identified in the 2022 Parks, Recreation and Open Space Plan, created with input from the community and adopted by council in April 2022.

To submit a question or comment, please email us at pwparksprojects@clark.wa.gov. Comments must be received by Sept. 30

Recently developed parks in Clark County are part of the Greater Clark Parks District program, which voters in the unincorporated urban area outside the City of Vancouver approved in February 2005.

When creating the district, voters approved an ongoing property tax levy, primarily to maintain 35 new parks, along with additional sports fields and trails the county would build in the Greater Clark Parks District. 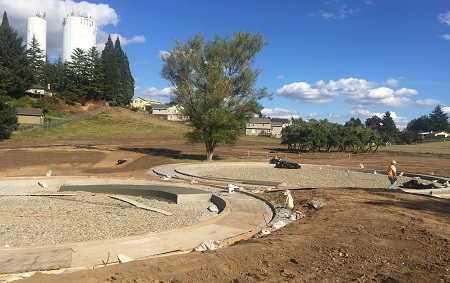 Neighborhood parks generally are 3 to 5 acres and located within walking and cycling distance for most users, who typically live within a half-mile radius of the park. For this reason, neighborhood parks typically do not include parking or restrooms.

Community parks provide a focal point and gathering place for broad groups of users. They are usually 20 acres or larger and generally serve residents within a 1- to 3-mile radius. Community parks often include recreation facilities for organized activities, such as sports fields, skate parks and play courts. They also may incorporate passive recreation space.

Because of their larger size and service area, community parks require more support facilities, such as parking and restrooms.

In addition, regional parks often space for passive recreation and include significant natural areas or access to lakes and rivers. Because of their larger size and service area, regional parks require more support facilities, such as parking and restrooms.

Please visit the Kelley Meadows Neighborhood Park webpage for information on how the city of Vancouver's Van Mall North annexation will affect development of this park.

The county collects two park impact fees, one for land acquisition and one for park development. Prior to 2014, these fees were deposited into separate accounts for each district. After that date, park impact fees were deposited into combined accounts for each district. Money from these combined accounts can be spent on either land acquisition or park development.

A park is developed when the county owns the land, has sufficient funds to pay for construction and has ongoing revenue to maintain the park.

Public Works also oversees the Camp Bonneville cleanup. The county ultimately intends to use a portion of the former U.S. Army post as a regional park.

Parks and Lands planning staff is developing a sustainability plan to improve financial sustainability of the farm and increase opportunities for public access. Plan development will include participation of a steering committee to help guide the process, implement a public engagement plan, and evaluate economic analysis of alternative approaches. The final sustainability plan will be considered by council for approval.