The 4.8-acre park, on Northwest 26th Avenue at Northwest 109th Street, was developed in 2016 as part of the Greater Clark Parks District program.

The property slopes upwards towards two water towers on the northeast corner. Vancouver Public Schools owns a large parcel of undeveloped land on the south side of the park. 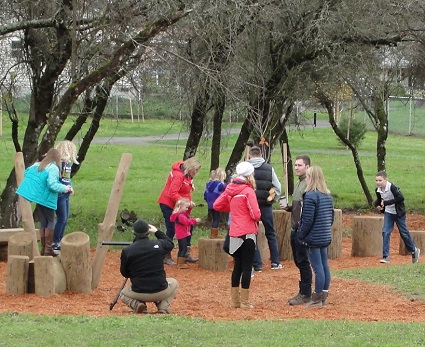 Children try out one of the "nature play" areas.

Neighborhood parks are designed to be walk-to/bike-to parks for people who live within a half-mile radius. They are not meant to be major destination parks, attracting visitors from across the county.

Accordingly, they do not have parking lots or restrooms, which are included in larger community or regional parks that draw people from far away.

Sorenson was a placeholder name used by county staff to identify the property. During development of the concept plan, neighbors were invited to suggest and vote on a new name for the park.

Keeping the Sorenson name received the most support. The name references the family who owned a large amount of land in this area, including the park site, until the late 1970s.

On Oct. 18, 2011, the Board of County Commissioners approved making "Sorenson Neighborhood Park" the permanent name.

Major decisions about what the park will look like and what features it will include were made during planning and design.

The first newsletter and comment form were mailed to neighbors living within walking distance of the park in January 2011.

Staff used the input received to a draft concept plan showing what the park might look like. This plan was presented to neighbors at a public meeting and posted on this Web page for review and input in March 2011.

The plan was then revised based on neighbors' input and mailed out to neighbors for additional input in late April 2011. Neighbors were also invited to vote on an official name for the park at the same time. The plan was also posted online along with an electronic comment form.

The final draft concept plan was presented to the Vancouver-Clark Parks and Recreation Advisory Commission in June 2011.

Members of the Felida Neighborhood Association and other dignitaries cut a celebratory ribbon for the new park, Dec. 3, 2016.
Location