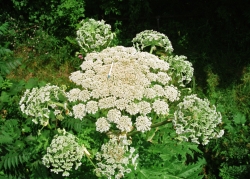 Why is giant hogweed a problem?

Giant hogweed is a serious health hazard. The clear, watery sap in the leaves and stems contains a phototoxin that causes human skin to be hypersensitive to sunlight, resulting in burns and blisters. Scars can last a year or more and direct contact with eyes can result in temporary or permanent blindness.

Giant hogweed is a highly competitive and invasive plant due to vigorous early season growth, high range of tolerances, ability to thrive in disturbed sites and height of flower stalk allowing for efficient spread of seeds.

Winged seeds are also dispersed by water or soil movement and can float up to three days allowing them to travel great distances. The relatively shallow roots do not hold soil well when the plant dies back in winter exposing soil to high rates of erosion. 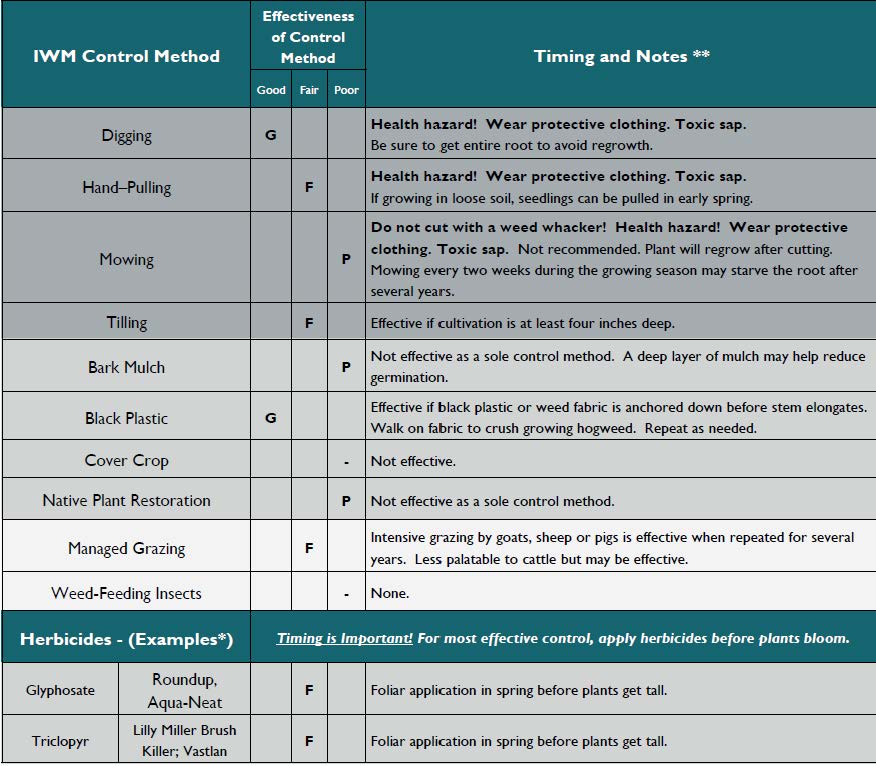 Giant hogweed is a perennial that flowers in the 2nd or 3rd year. It can grow 10-15 feet tall and has dark reddish-purple spotted stems and leaf stalks with dense, stubby hairs that cover both. Stems can be two to four inches in diameter with large deeply incised compound leaves that are three to five feet wide.

Flowers bloom mid-May to July with numerous large, umbrella-shaped white flower clusters that can be up to two and a half feet in diameter across the top. Seeds are winged. Giant hogweed is usually found in ravines, parks, wooded open spaces, roadside ditches and wetlands. The plant prefers partial shade but can grow in full shade to full sun.

Giant hogweed is similar in appearance to native cow parsnip. Giant hogweed is much larger however, the purple blotches are more raised and bumpy, and the hairs underneath leaves are shorter.